Don’t Be Afraid To Let Them Show

This morning the kids were already awake quite early. They came around to give us a wake-up call and then we all had some breakfast. Whilst we were waiting for our tour guide to arrive and were absorbing the morning air, they already released some energy on the camp ground’s go-carts.

At 9:00 am he arrived and we started driving to the National Forest of the Kaibab, the original name of the Grand Canyon. Meet our tour guide, Marvelous Marv 🙂 You can also find him on his website www.marvelousmarv.com.

Driving through the Colorado Plateau and past Red Butte, the sacred mountain of the Havasupai Nation, we arrived at the park. The Grand Canyon really is very spectacular. Unfortunately the weather wasn’t all that great so we had a little bit of a fog over the mountains. Still, it was an amazing sight. If you can find a brown spot on the pictures, you found the Colorado river which was showing its true colours. 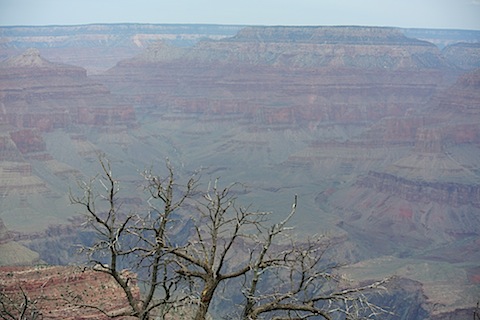 The trails are quite long but the natives used to climb the mountains with the aid of mules. We happen to come across some of these (the mules, not the natives) on our short way down on one of the oldest trails in the Grand Canyon.

There will be some that will disagree but I also found the geology quite interesting. There are over 20 layers of rock to be identified and all of them are older than the dinosaur ages. The only artefacts ever found in these stones were from human descent.

We also found the plants growing here very cool. You never know what’s growing next to you. There’s a tree for example which blossoms all year round and its flowers are used for making medicine and tea. The bast is used for making shoes, clothes and even baby diapers due to its softness. We were also lucky as we saw a Kaibab Century in full blossom which only happens every century (at least that’s what Marve said but Google disagrees). The Banana Yucca plant is used for its sharp ends and used as needle and treat. Then there was also the Fernbush which comes in handy when you have asthma – or if you just like the taste, as tea can be made from it.

And then there was also the wildlife. Some people spotted an elk when we drove through the entrance of the park but we missed that. We did manage to see a condor though (which was very tricky to get on camera) as well as some squirrels. These last ones were actually quite cheeky and tried to get very close to you in search for food. It was no problem at all getting these guys photographed. 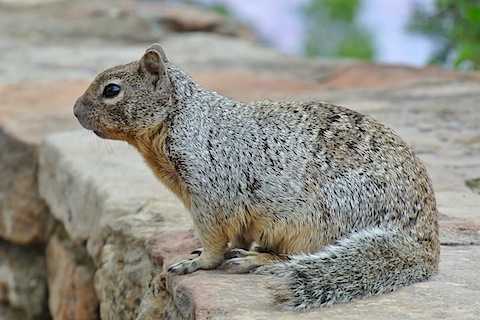 And finally we found a real cactus. Although I’m expecting to see some much, much larger ones in the rest of Arizona or in Mexico, these ones were quite nice as a start.

Tomorrow we say good-bye to Val & Koen and continue heading south. If you want to keep in touch with them or read the other side of the story, you can find them on their blog at valenkoen.blogspot.be

Don’t be afraid to let them show