You Shook Me All Night Long

That distant thunder came closer and closer until we were in the middle of a tropical rain storm. For those unfamiliar with the phenomenon, it comes with a lot of lightning, strong winds, heavy rain and loud thunders. Marijke was trying to hold the tent from the inside so the back wouldn’t rip apart whilst Patrick had to close all the ‘curtains’ so it wouldn’t rain inside. That made it become super hot inside the tent as the air couldn’t escape. The storm lasted for hours. It was only late in the morning that we fell back asleep but then the morning sun quickly woke us up again. In other words, we didn’t sleep much. 🙂

The morning didn’t bring much comfort either as we had to wash ourselves in a dirty shower (if you only pay 6 euro for camping, you need to adjust your standards for hygiene). This was again a complete waste of effort as by 10:00am we were sweating our pants off already.

Whilst Patrick was reading a book, Marijke tried to take some pictures of the local huge butterflies – we saw one that was over 10cm long – but they were too fast to capture on camera. So instead she got a shot of this helicopter-libelle and this shell found on the beach.

Suffering too much from the heat we hided back in the car with the full air-co on and started to drive to the camp site for today: ‘Rocca Azul’. We had to pass again over the water-road. This time Marijke took some pictures.

On the road back we came across some deep water pools – caused by the nightly rain – so we took a different road. As the navigation had no idea where we were driving, we got a little bit lost within the small town. The cobble streets surely woke us up :).

Back on the road everything went smoothly again until we hit a traffic jam…. You would think that in such a big country like Mexico there would be plenty of room for everyone… Especially around Guadalajara the traffic was hectic and it was a matter of honour not to drive behind ‘the foreign car’ so we were overtaken from all directions by everyone!

And then, we arrived in an area looking completely unlike anything we’ve seen so far in Mexico. Big haciendas were adjacent to this sweet cobble road which was decorated with green plants. And all the houses had a garden.

There is really beautiful nature around here too so once we parked the car, we took a short walk across the camp site. 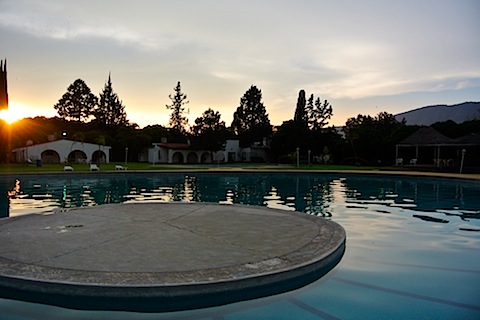 Had to cool me down to take another round

Back in the ring to take another swing

My mind was aching, we were making it

And you shook me all night long