This Is My Church

When we arrived at the campsite, we had a small dinner and went to bed. Temperatures were dropping to 22°C, which is the coldest we have been in over a month! The cathedral of San Juan Teotihuacan made sure that we knew very well what time it was every fifteen minutes! We woke up at 8:00am and after breakfast and showers we were ready for ‘Teotihuacan‘, the home of the gods and the most significant Mesoamerican pyramids built in the pre-Columbian Americas.

It was only a short drive to the site and before we knew it we were immersed in the rich history of this city, which was built between 200 BC and 250 AD and was home to over 125.000 people. Our exploration started at the temple dedicated to the Feathered Serpent, whom the Aztecs much later named Quetzalcoatl. The temple is a religious and political centre and its importance can be derived from the more than hundred people that were sacrificed when it was built. Not so long ago hundreds of mysterious golden spheres were found under this building, whose purpose yet needs to be discovered. 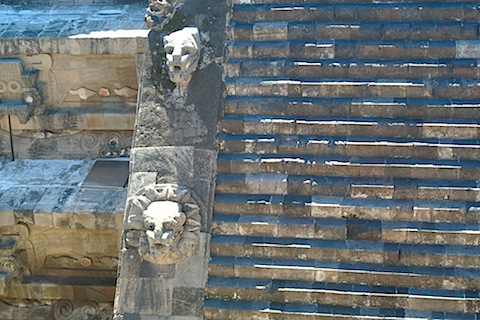 The temple sits on a plaza that formed the religious and political center of the city. 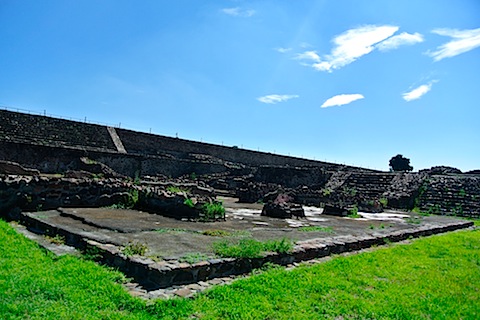 From this plaza, the ‘Avenue of the Dead’ leads to the other temples and pyramids in the city. It’s oriented 15.5° east of north and was used as a way of marking important days in the calendar. The size reminded us of the National Mall in Washington DC, very open, wide and long and flanked by impressive buildings.

The second pyramid is the ‘Pyramid of the Sun’, which is the name the Aztecs (who came here on pilgrimage) gave it as history doesn’t know how the original Teotihuacanos named it It’s 75m high, making it the third highest pyramid in the world. It was built in several phases, as the Teotihuacanos like to build things on top of other (older) things. It’s an exhausting climb to the top, but a rewarding view! 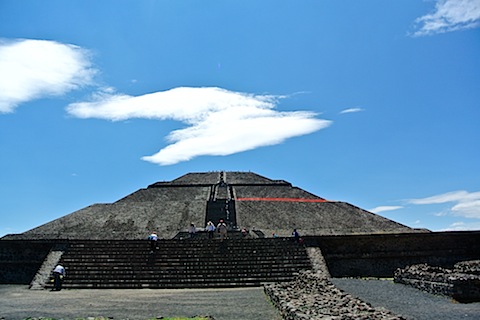 From the top, you have a great view of the ‘Pyramid of the Moon’, which sits at the end of the avenue.

The ‘Pyramid of the Moon’ is a bit smaller with only 43m, but it’s a more complex structure as it also mimics the mountains in the background.

Also here you have a beautiful view over the historical site. 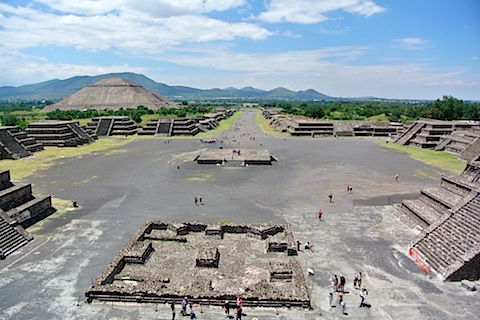 Next to the pyramids, there are also several temples that are worth seeing, all decorated in fine detail with the important symbols such as butterflies, parrots, snakes and pumas! 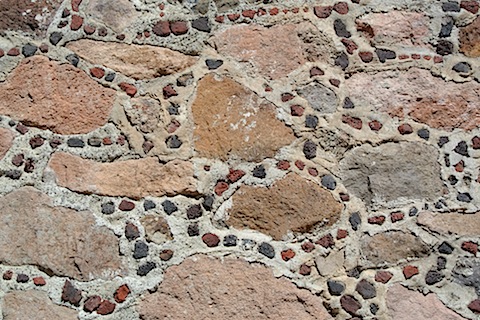 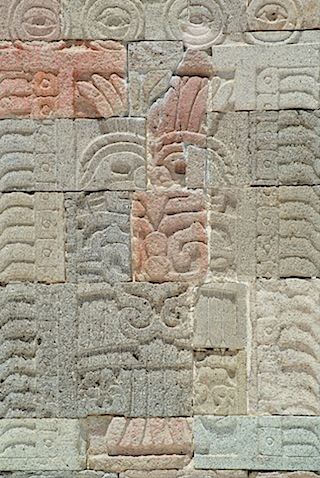 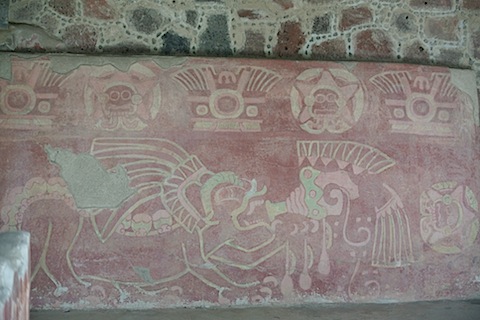 We had a very late lunch at the restaurant on-site as we were starving after 4 hours of walking in the sun. After we had recovered, we rejoined Rodrigo on the parking lot and drove 45km to downtown Mexico City. The drive was pretty smooth and we managed to find the hotel without any detours. More on Mexico City tomorrow!

This is my church, this is where I heal my hurt

It’s in the world I become, contained in the hum, between voice and drum

It’s in change, the poetic justice of cause and effect, respect, love, compassion