We Built This City (On Rock And Roll)

On our Olympic tour of the Americas, we have now arrived in Mexico City, host of the 1968 summer olympics. Mexico City, or ‘la DF’ (Districto Federal) as it is known locally, has even hosted the football World Cup final twice in the legendary Aztec Stadium (more on that later!). Even Eddy Merckx came here in 1972 to break the hour record in cycling (49,431 kilometers). So definitely worth a visit… to make it even more appealing, Patrick’s friend from work Laurent spends quite some time here so it was great to catch up with some people from back home!

Patrick started the day with some light infotainment on the TV, where they advertise products to make your butt look bigger! Yes, bigger (left on the TV screen is before).

However, we are not here to watch daytime television! First of all, this is a big city! With over 20 million people in the metropolitan area, it is about the same size as Mumbai or Delhi, making it the largest metropolitan area in the Western Hemisphere. Given the size of the city, it is not so easy to find hidden treasures! However, we were very impressed with the ruins of Aztec ‘Templo Mayor‘ in the city center.

When Mexico City was founded by the Aztecs around 1325, they named it ‘Tenochtitlan‘ and extended the main temple seven times. The temple was destroyed by the Spanish in 1521. It’s a miracle that anything remains and has been found again, as everything above ground was knocked down and covered by the ‘Zocalo‘ – which is now the main square of Mexico City. It’s only when they wanted to fix the underground electricity lines in 1978, that they uncovered this great sleeping treasure.

At the entrance of they site, we were impressed with a huge stone disc representing Coyolxauhqui (*). The original is inside the museum, but this replica shows the full colours.

We walked between the seven different layers of the temple, discovering snakes, toads, dismembered gods, skulls, altars and… a sewage drain that was dug through the temple unknowingly a long time ago. 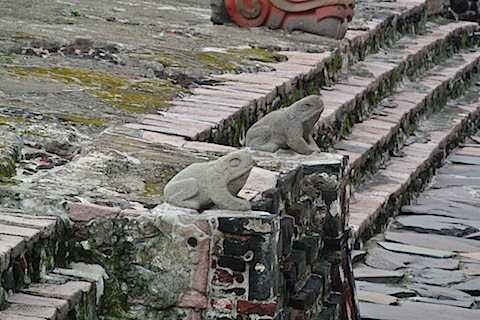 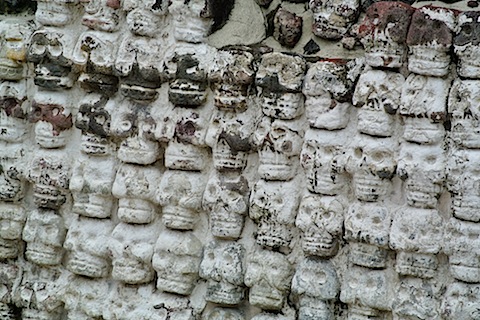 Next to the temple, the Templo Mayor museum shows a lot of artefacts that have been recovered. They also have an impressive collection of Mesoamerican sculptures. 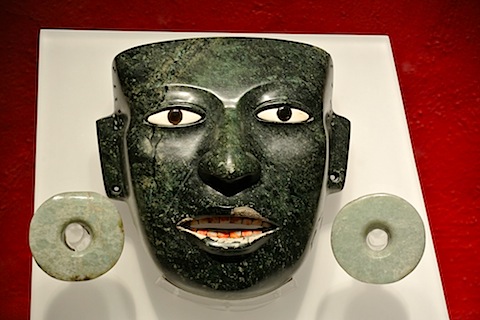 Don’t be fooled by the pictures, the last one representing ‘Tlaltecuhtli’ is about 14 square meters and weighs 12 tons.

After the museum visit we walked around town for a bit, across the the occupied Zocalo (teachers protesting against education reforms) towards the ‘Palacio de Bellas Artes’. At the time, it started raining heavily as well but as you can see, someone came prepared!

We took a taxi back to the hotel and decided to stay another night in Mexico City as we still want to explore more although the traffic is mad and the taxi drivers act like they are the only ones on the street.

Say you don’t know me

Or recognise my face

Who goes to that kind of place

(*) okay, there are going to be more complicated and unpronounceable names coming. We try to be as correct as possible, but don’t shoot the messenger.