We woke up this morning on the parking lot of ‘Hotel Sierra‘ where we camped for free last night. We made full use of the facilities and went for a morning swim. We had a watermelon for breakfast – as we have learned in the past that they may be confiscated at the border. We booked our hostels for Panama City and Cartagena and also booked a flight for next week Friday (4 October). That should give us enough time to get the car in a container and on the way to Colombia.

We left the hotel around 10:00am and arrived at the border an hour later. It only took us 15 minutes to check out of Costa Rica – very smooth! We drove down to the Panama immigration and customs with high expectations… and we were seriously disappointed. There was an enormous line-up already to park our car. We parked behind a car with licence plates from California – and we quickly figured out that the owner was trying to do the same as us: get into Panama without too much hassle. We were happy to meet Damon from estoyvagando.com and we had a partner in crime now. We started queueing for immigration in what seemed liked an endless line that was not moving. We got a sticker in our passport from an official and paid 1 USD. We were told to buy vehicle insurance first – so we crossed the street to arrange that. We then went back to the queue but lined up with the truck drivers instead (well, we do drive a truck, don’t we?). When we were first in line, the lady told us we needed to show 500 USD in cash or a bank statement to show that we could afford being in Panama. We discussed a bit back & forth, but in the end we were sent to an internet café where we printed a bank statement. With that in hand we went back to the window and got the stamp. We then went to customs for the import documents for the car. It took a bit of time and some more stamps left and right from some people with clipboards… but we made it in the end. It was one of the most crazy border crossings – and with 3 hours in total also the longest. 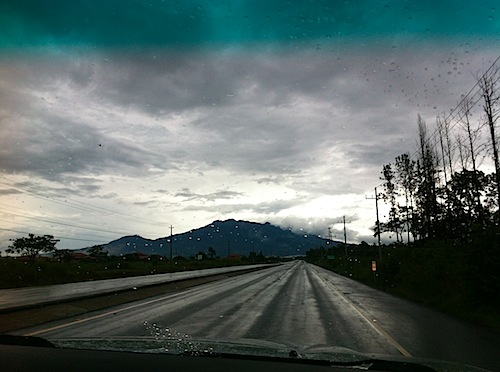 Fairly unimpressed we drove into Panama behind Damon. We were held back a bit because our car was searched at a military checkpoint – and we caught up with Damon who was pulled over by the police and issued a speeding ticket. We decided to drive together from there on and after refuelling and a supermarket stop, we arrived in Boquete at ‘Pension Topas‘. 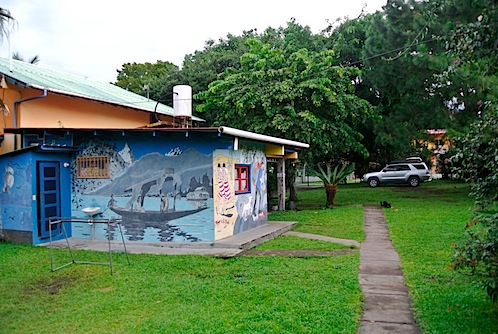 We had dinner and a beer with Damon at the common area. This morning we left in 33°C but tonight temperature had dropped to 20°C!

Got the feeling, power steering