We started off the day with exploring the waterfall ‘La Catarata’, which we were told was easy to get to by car. Unfortunately we hit a dirt road with a lot of muddy tracks, so we parked the car and did the final climb on foot. Another hot day in Costa Rica, so we were covered in sweat by the time we reached the waterfall. It was a very slippery experience. Patrick almost landed on his butt in the waterfall. Marijke mastered her balance much better – the evidence is in the picture below! 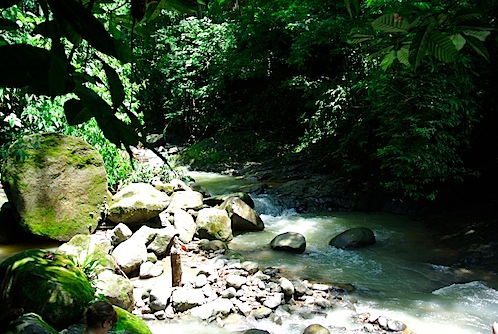 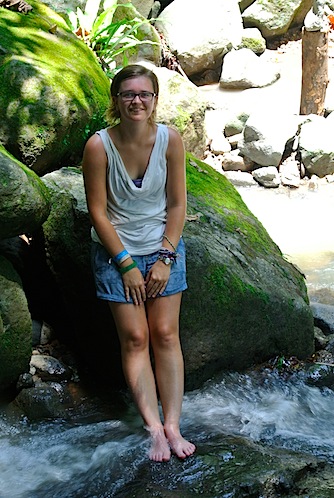 After the waterfalls we rejoined Rodrigo, bought some more water and headed towards the south! On the map we could see something marked as ‘stone spheres’ and after asking a local, he offered to lead the way to the place! It’s a good thing he did, because whereas the site itself is full of signs, there is no sign pointing to the archeological site itself! For those in search too and lacking a helpful local, the place to be is Finca 6. We parked outside the gate, walked through the banana plantation and found the mysterious balls!

We had a late lunch at a local ‘soda’ for little money and then continued our drive towards ‘Golfito’, which is a small fisherman town. We found a hotel that let us camp on their parking lot for free. They also have a swimming pool and internet which we volunteered on using – I don’t know what we need more! We were in the hotel restaurant when a tropical thunderstorm passed and we went to sleep in a somewhat cooler tent! Tomorrow we head for the border and the last country in Central America: Panama!

I chew my nails and I twiddle my thumbs

I’m real nervous but it sure is fun