Time Is On My Side

Today we got the ball rolling for shipping the car to Colombia. We met Nate and Sarah at the Balboa Yacht Club around 8:00am. We took some time for taking a picture with the Panama canal in the background. Yesterday we crossed the bridge in the background, but we could not see the canal from there. This morning the weather was nicer, although we did have a lot of rain throughout the day. 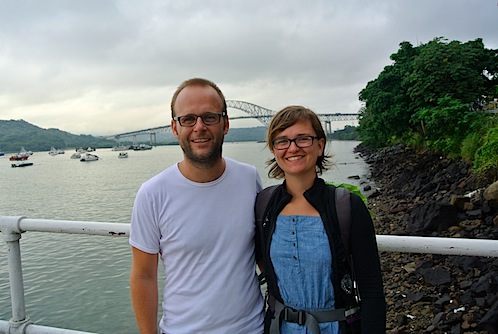 We also met other overlanders from Germany and France who will ship on a ferry as they are driving trucks and motorhomes and don’t fit in a container. Our shipping agent arrived fashionably late and we drove behind her to the police inspection station. This inspection usually only takes place between 9 and 10:00am, when it’s not raining and the engine is cold. So we had to wait in the parking lot for a bit – long enough for it to start raining anyhow!

When the police inspector came outside, he didn’t like the rain so he went back inside and we had to sit it out. He came up with the idea of moving the cars in one by one under the small roof – and Rodrigo went first. It had stopped raining at that point, but the inspector had disappeared back inside as well. 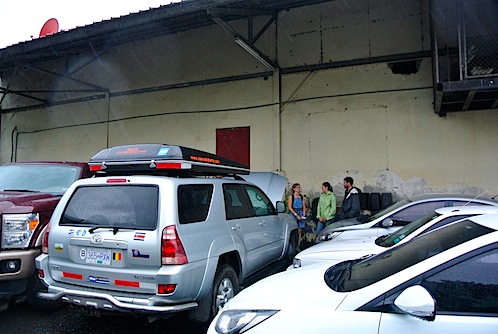 When the inspector came back outside half an hour later it had started raining again. Luckily he had a baseball cap on to protect himself from the rain and he looked at the VIN number on the car. Due to the angle in which the car was parked there was a lot of glare on the windshield and the number was not readable. The inspector went back inside for 10 minutes. When he came outside again, he opened the car door and looked at the sticker with the VIN number and signed off the document. This inspection is notorious in the overlanding community for people being sent back to the border to correct mistakes on paperwork, so we were very relieved. Nate and Sarah also passed the test and we drove to a nearby shopping centre as we had to return at 3:00pm to pick up our permit. We did not have breakfast so we had an early lunch (or late brunch..)!

We killed some time wandering through the enormous mall and at 14:00 we took a taxi to the ‘Secretaria General’. After trying to explain to the first taxi driver where it was – even showing our navigation and street names and everything – we took another taxi and it only took 5 minutes to get there. It was on the other side of the street from the inspection area for no apparent reason. Patrick went inside and had to surrender his ID for a visitor badge. Once inside and asking around for the right office, he found the right door… which does not have a door handle.

After waiting for about half an hour inside, we got the permit and we took the taxi back to the shopping centre. There we made some more copies of all our documents and then headed back to the hostel through evening rush hour, keeping us focused at maximum level.

We arrived back at the hostel and warmed up the leftovers of yesterday’s lasagne and after a cold beer we’ll probably call it an early night. Step one of the process completed: we can load the car in a container on Wednesday! We are preparing a big blogpost to detail out everything regarding the shipping and put it on-line when we’ve completed the whole thing!
Time is on my side, yes it is
Now you always say that you want to be free
But you’ll come running back to me
http://www.youtube.com/watch?v=XzcWwmwChVE