How Does That Grab You?

Well, this should be a blog post to remember… it sure was a day we won’t easily forget

Our hostel in Piura was a complete disaster – even though called Hospedaje California it had no hint from California what so ever. Sleeping in a room without a proper window and hearing all the late night city sounds does not deliver a good night sleep. We should add ‘windows’ to our hostel checklist… we did not check behind the curtain properly this time.

That was only the start of the day… because someone broke into our car around 9:00am. We had stopped for breakfast in town (it is Sunday morning after all) and we returned to the parked car, Patrick noticed that the stuff on the backseat had been moved around and then we noticed that the trunk was open and the front door lock was forced open.

It took us a while to find out what exactly had gone missing as most of our stuff was still there, but it seems now that all our (empty) bags and hiking boots have gone missing. That is all of them, even the big backpacks and Marijke’s rain proof handbag which was hidden in the back of the car behind all the clothes. The bags are empty (except for a fake wallet with old credit cards) and Marijke’s old phone – which does not work outside of Europe. So Mr Thief, the joke’s on you!

Funny part of this all – if there is such a thing – is that there is a police office right around the corner of where the car was parked. When we went there they didn’t even help us one little bit: it’s not their department. Luckily this nice lady from the restaurant where we had breakfast offered to come along to the other police station to help with the declaration. Our Spanish was not nearly good enough to thank her for such a nice act!

After the declaration was written up, we drove out of Piura as fast as the injured Rodrigo could take us. Even though we drove through a beautiful desert today, our minds were in other places, wondering if we could have done something differently, noticed something beforehand. I guess that it was just that place and time thing.

And when you’re in the desert, you might as well release your frustrations… nobody for miles around! 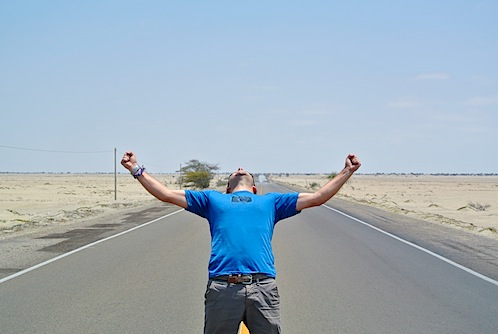 When you think the day couldn’t possibly get any worse, we got pulled over by a policeman who tried to get a bribe from us for not having a permit for our tinted backseat windows. If anything, our windows should be tinted more as proven earlier today! We made clear that we were not informed about this at the border and that we would pay any fine only at the police office in town. We stood our ground and did not take any crap from him (even though he was listing a series of bogus infractions) and he walked back to his car and drove off. We double checked this policy with the tourist police in town and they told us that this permit is only necessary for people from Peru, not for foreigners. You see, this is not our first day on the road!

Tonight we are staying at a lovely ranch called ‘Rancho Santana’. The people here are really nice and the farm animals wander around our car. Hopefully we will be able to catch a good night sleep after a difficult day.

(Sneak preview of tomorrow’s blogpost: Rodrigo was fixed up for $10 USD and we fitted a new alarm system. Everything back to normal!)

How does that grab you darlin’?

How does that mess your mind?